Climate change is a global problem that will require global cooperation to address. The objective of the United Nations Framework Convention on Climate Change (UNFCCC), which virtually all nations, including the U.S., have ratified, is to stabilize greenhouse gas (GHG) concentrations at a level that will not cause “dangerous anthropogenic (human-induced) interference with the climate system.”1 Due to the persistence of the increased concentrations of GHGs, significant emissions reductions must be achieved in coming decades to meet the UNFCCC objective. Unrestricted growth in global emissions is projected to lead to a 5% increase in CO2 concentration levels from 2011 to 2030 and between a 74-202% increase by 2100.2 Stabilizing CO2 at 450 parts per million (ppm) in the atmosphere by the year 2100 (which will likely keep temperature change below 2°C relative to pre-industrial levels) will require lowering global CO2 emissions in 2050 by 40-70% compared to 2010, and will require emissions levels near zero GtCO2e in 2100.2 Stabilization at 500 ppm, almost double the pre-industrial concentration, could be achieved by holding GHG emissions constant for 50 years and then reducing emissions by two-thirds over the following 50 years.3 In 2017, U.S. GHG emissions were 6.5 GtCO2e.4 In October 2018, the IPCC report published the Special Report on Global Warming of 1.5oC. It details impacts of temperature rise of 1.5 and 2oC, and mitigation strategies necessary to remain below warming of 1.5oC.5

Historical Carbon Emissions with Two Potential Pathways for the Future6

The Kyoto Protocol came into force on February 16, 2005. The Protocol established mandatory, enforceable targets for GHG emissions. Initial emissions reductions for participating countries ranged from –8% to +10% of 1990 levels, while the overall reduction goal was 5% below the 1990 level from 2008 to 2012.12 When the first commitment period ended in 2012, the Protocol was amended for a second commitment period; the new overall reduction goal would be 18% below 1990 levels by 2020.13

In December of 2015, all Parties of the UNFCCC reached a climate change mitigation and adaptation agreement, called The Paris Agreement, in order to keep global temperatures below a 2°C increase above pre-industrial temperatures. The agreement will be enforced 30 days after 55 countries ratify the agreement. The 55 countries must account for at least 55% of the global emissions.14

Government Action in the U.S.

Stabilizing atmospheric CO2 concentrations cannot be accomplished without changes in energy production and use. Effective mitigation cannot be achieved without individual agencies working collectively towards reduction goals.2 Stabilization wedges are one method of illustrating GHG reduction strategies; each wedge represents 1 billion tons of carbon avoided per year over 50 years.3 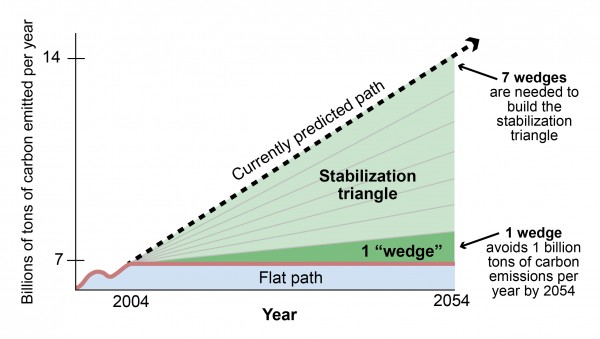