Autonomous vehicles (AVs) use technology to partially or entirely replace the human driver in navigating a vehicle from an origin to a destination while avoiding road hazards and responding to traffic conditions.1 The Society of Automotive Engineers (SAE) has developed a widely-adopted classification system with six levels based on the level of human intervention. The U.S. National Highway Traffic Safety Administration (NHTSA) uses this classification system.2

The SAE AV classification system is broken down by level of automation:2,3

AV research started in the 1980s when universities began working on two types of AVs: one that required roadway infrastructure and one that did not.1 The U.S. Defense Advanced Research Projects Agency (DARPA) has held “grand challenges” testing the performance of AVs on a 150-mile off-road course.1 No vehicles successfully finished the 2004 Grand Challenge, but five completed the course in 2005.1 In 2007, six teams finished the third DARPA challenge, which consisted of a 60-mile course navigating an urban environment obeying normal traffic laws.1 In 2015, the University of Michigan built MCity, the first testing facility built for autonomous vehicles. Research is conducted there into the safety, efficiency, accessibility, and commercial viability of AVs.4 Unmanned aircraft systems (UAS), or drones, are being developed and automated for commercial ventures such as last-mile package delivery, medical supply transportation, and inspection of critical infrastructure.5

AVs use combinations of technologies and sensors to sense the roadway, other vehicles, and objects on and along the roadway.6

Although AVs alone are unlikely to have significant direct impacts on energy consumption and GHG emissions, when AVs are effectively paired with other technologies and new transportation models, significant indirect and synergistic effects on economics, the environment, and society are possible.20,21 One study found that when eco-driving, platooning, intersection connectivity and faster highway speeds are considered as direct effects of connected and automated vehicles, energy use and GHG emissions can be reduced by 9%.22 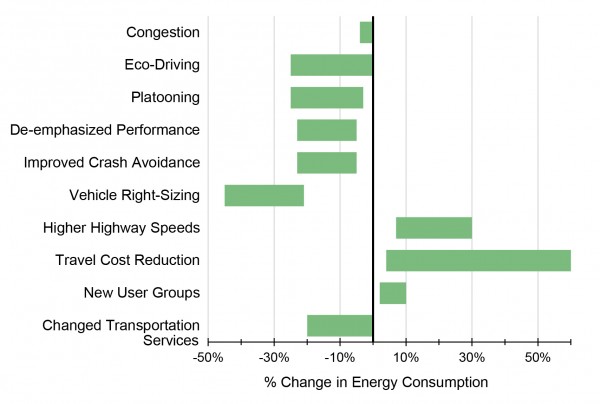