Americans enjoy a diverse abundance of low-cost food, spending a mere 9.5% of disposable income on food.1 However, store prices do not reflect the external costs—economic, social, and environmental—that impact the sustainability of the food system. Considering the full life cycle of the U.S. food system illuminates the connection between consumption behaviors and production practices.

The energy used by a system is often a useful indicator of its sustainability. Food-related energy use accounts for over 12% of the national energy budget.31 Agriculture and the food system as a whole have developed a dependence on fossil energy; 13 units of (primarily) fossil energy are input for every unit of food energy available.18,29 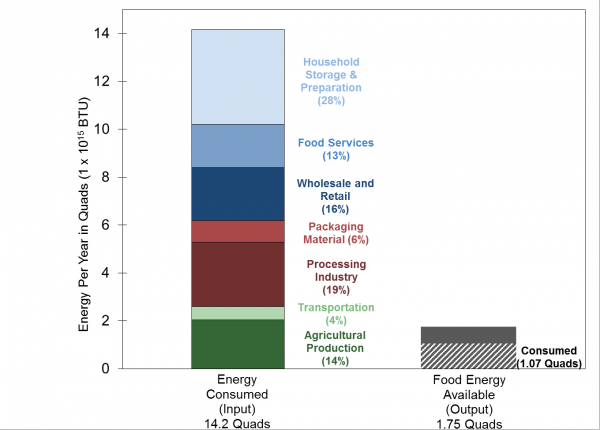 Meat-based diets use more energy to produce than vegetarian diets, one study suggests twice as much.16 One serving of beef has more associated greenhouse gas emissions than 20 servings of vegetables.35 Meat production as it is widely practiced today also has significant environmental impacts on land use, water use and water pollution.36 20% of Americans cause half of the food-related GHG emissions; a diet shift away from meat could reduce this, with some studies estimating reductions of up to 73%.32,37

Much of household food waste is due to spoilage. Prevent food from going bad by buying smaller amounts; planning meals and sticking to shopping lists; and freezing, canning, or preserving extra produce.38 Direct-to-consumer meal kits are growing in popularity. By streamlining the supply chain, and reducing food waste and last-mile transportation, meal kits are responsible for 25% lower GHG emissions than a store bought meal.39 Many foods that are still safe are thrown out due to confusion about “sell-by” and “use-by” dates; for further information, see the USDA’s Food Safety and Inspection Service.40 Whether washing dishes manually or in a dishwasher, save water and energy by using best practices such as not letting water run constantly, rinsing in cold water, only run dishwashers with full loads, and avoid pre-rinsing dishes.41

Home refrigeration accounts for 13% of all energy consumed by our food system.16 Today’s convenience foods rely heavily on refrigeration for preservation. Consider a smaller, more efficient refrigerator and buying smaller quantities of fresh produce more frequently. Refrigerator efficiency more than doubled from 1977 to 1997, but increases in size have largely offset this improvement.14,42

Organic farms do not use chemicals that require large amounts of energy to produce, pollute soil and water, and present human health impacts. Sales of organic food in 2019 were 5.0% higher than in 2018; organic food now accounts for 5.8% of all food sold in the U.S.43

Transportation accounts for approximately 14% of the total energy used in the U.S. food system.44 There is significant room for improvement in how people acquire their food. Community Supported Agriculture and Farmers Markets are great ways to support your local food system.