The annual life cycle burden of a computer is 5,600 MJ. Because only 34% of the desktop's life cycle energy consumption occurs during the use phase, extending the lifetime of a computer could mitigate the energy burden of the production and disposal phases. 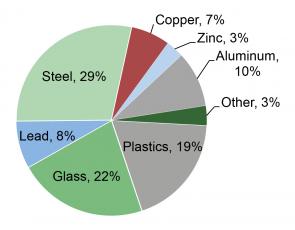 Distributed energy resources – most prominently solar PV, but also other forms of small-scale localized generation – have been growing as a share of U.S. electric generation. In the last several years, utilities, states, industry groups, and advocacy organizations have proposed and in some cases implemented new pricing and policy mechanisms, such as “value of solar” tariffs, buy-all-sell-all rates, modified net metering, standby rates, and high fixed charge rates to adapt pricing models to the growth in distributed resources.

Goals & Objectives: This project will identify the various electricity pricing and policy mechanisms being used or proposed to manage distributed energy resources; assess the benefits/drawbacks to each; perform scenario modeling of impacts for typical residential customers; and provide a recommendation on potential paths to pursue in Michigan.

Theoretical Justification, Social Benefit, or Significance: Traditional utility rate structures pose two primary problems in the face of growth of distributed energy resources. First, they can cause unfair distribution of costs among utility customers, resulting in hidden subsidies. Second, they can distort the perceived economics of distributed energy resources, resulting in sub-optimal adoption of these resources compared to the economic value they provide. Utilities have been working for several years to determine appropriate pricing policies and compensation mechanisms for distributed generation, but no consensus has emerged. This research will support DTE Energy in its evaluation of the preferred policies to pursue for the State of Michigan to ensure that distributed energy resources are adopted and integrated on the basis of fair and economic decisions.

Specific Activities & Duration: The project should include:

Internet / news / industry research identifying the policies, the arguments for and against each, the attempts to use each, and the successes/failures of each of those attempts
Academic research on the literature (in economics, business, etc.) laying the theoretical and historical groundwork for the traditional and new pricing policies and possibly case studies on the recent attempts at new models in the industry
Quantitative, analytical modeling of scenarios for typical households with and without distributed generation
Integrative Approach: This effort would benefit from the skills of students with interests / expertise in several topic areas / skill areas, including: