Computers and office equipment accounted for 24% of the total electricity consumption (253 billion kWh) of office buildings in 2012. 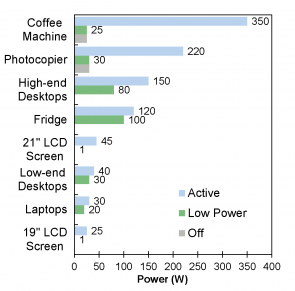 Green Information Technologies (Green IT) reduce the environmental impacts associated with conventional Information Technologies (IT). Examples of Green IT include energy efficient hardware and data centers, server virtualization, and monitoring systems. Green IT focuses on mitigating the material and energy burdens associated with conventional IT while meeting our information and communication demands.1 Composition of a Desktop Computer21