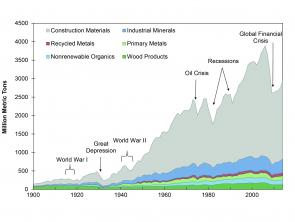 Previous studies of the availability of lithium for use in batteries to power electric vehicles (EVs) have reached the generally encouraging conclusion that resources are sufficient to meet growing demand for the remainder of the 21st century. However, these surveys have not looked past estimates of lithium resource to the geological constraints on deposit size and composition that will allow the resources to be converted to reserves from which lithium can be produced economically. In this survey, we review the relevant geological features of the best characterized pegmatite, brine and other types of lithium deposits and compare their potential for large-scale, long-term production.

The comparison shows that the average brine deposit (1.45 Mt Li) is more than an order of magnitude larger than the average pegmatite deposit (0.11 Mt Li) and that brine deposits, especially the large Atacama (Chile) and Uyuni (Bolivia) deposits, have a much larger total lithium resource (21.6 Mt Li). Brine deposits clearly have a much greater capacity for large-scale, long-term production than do pegmatite deposits. However, individual brine deposits differ considerably and successful production from one deposit does not necessarily assure success at others. Conversion of brine resources to reserves will depend on the degree of compartmentalization of brine reservoirs, the extent to which brine can be recovered without dilution from recharge waters and degradation of salt-bearing reservoir rock, and whether other constituents of the brines, including potassium, magnesium, bromine and boron, restrict processing or the capacity of production to respond to changes in demand for lithium.

Despite their smaller size and total estimated resource (3.9 Mt), pegmatites will remain of interest because of their wider geographic distribution and consequently lesser susceptibility to supply disruptions and their more lithium-dominant compositions, which might allow more flexible response to market changes. Some deposits will be amenable to large-scale mining, but significant production might also come from selective, underground mining of small deposits in areas with low labor costs. Even the largest pegmatite deposits, such as those at Greenbushes (Australia) and Manono–Kitolo (Democratic Republic of Congo) have estimated resources that are similar to only an average brine deposit. For this reason, continuous, long-term production from pegmatites will require extensive exploration and discovery of new pegmatite deposits and districts.

Two other types of lithium deposits, unusual rocks and unusual fluids, have also received attention. Deposits consisting of rocks and minerals that are enriched in lithium by interaction with brines and hydrothermal solutions, including the large Jadar (Serbia) and King Valley (USA) deposits, have estimated resources of about 3.4 Mt Li. Unusual brines in oilfields and the Salton Sea geothermal field (USA) contain an estimated 2 Mt Li. Both of these deposit types will require new processing methods but are likely to become important because of their lithium-dominant compositions and relatively large size.

The total lithium resource in these deposits (31.1 Mt Li) far exceeds estimated lithium demand of up to 20 Mt Li (including consideration for recycling) in all markets through 2100. The difference between these two estimates should be vied largely as a challenge rather than a comfort. Evaluation of the economic extractability of these resources will require large investments and result in only partial success. If prices provide sufficient encouragement and exploration is sustained, however, lithium resources should be available for the next century.