About 80% of the nation's energy comes from fossil fuels, 8.9% is derived from nuclear, and 12.5% comes from renewable sources. 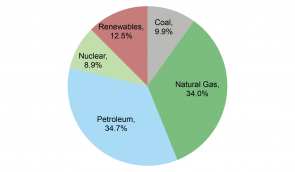 Standards of living are difficult to measure, but indicators of social development are available. A basic measure, per capita Gross Domestic Product (GDP), is the value of all goods and services produced within a region over a given time period, averaged per person. A more advanced metric, the Human Development Index (HDI), considers life expectancy, education, and Gross National Income (GNI). The three highest HDI-ranked countries are Norway, Ireland and Switzerland.1 Many of the indicators discussed below are used to measure progress towards the Sustainable Development Goals (SDGs), a set of targets agreed upon by United Nations member states as crucial for global human progress.